Click here for the Force "I can" checklist
Extra Practice Worksheets

Explain that force is a vector quantity, expressed in Newtons, having both magnitude and direction.
​a: State that one Newton of net force will cause a 1 kg object to experience an acceleration of 1 m/s/s. A Newton also can be represented as kg·m/s/s
Summary of Concept: A newton is a unit of force.  Specifically it would be how much force is required to cause an acceleration of 1 m/s^2 in a 1 kg object.
Activities From Class: ​Newton Introduction, Introduction to Force
Simulations: Phet Force Simulation
Extension Opportunity: Create and film an experiment in which you demonstrate the movement of a 1 kg object that is accelerating at 1 m/s^2. Describe any variables that would impact the accuracy of the demonstration and discuss what you have done to limit the impact of those variables.
See Videos Below:

Determine net force through the use of one-dimensional (positive and negative) vector addition.
Summary of Concept: Not all objects have equal forces acting on them.  Forces acting against one another can be calculated using simple vector addition.  With offsetting forces in 1 dimension, this will involve the addition of a positive and negative force.  For example 3 Newtons (to the right) + -2 Newtons (to the left) would result in 1 Newton of force to the right.
Activities From Class: Net Force Calculations, No eating on the Bus, What's your vector Victor
Simulations: Phet Forces
Extension Opportunity: Find a video of an accelerating object on youtube.  Estimate the forces that must be involved and create a free body diagram to represent the objects acceleration. You may complete this extension using google draw, slides, or both.  You may also share your findings using screencastify (download the extension from the chrome web store).
See Videos Below:

Explain that an object does not accelerate unless an unbalanced net force acts on it.
a: Explain that when the vector sum of the forces (net force) acting on an object is zero, the object does not accelerate.
b: Explain that for an object that is not moving, the object will continue to remain stationary.
c: Explain that for an object that is moving, the object will remain moving without changing speed or direction.
Summary of Concept: In order to accelerate an object we must have unbalanced forces acting on the object.  In other words, there must be more force being applied in one direction than is being applied in the opposite direction.  Once moving, the object will continue moving in the same direction unless another force is applied. If two forces are being applied evenly in opposite directions, they are balanced and would not cause acceleration.
Activities From Class: It's not magic it's Inertia, Ball and a Straw Lab, What Makes Something Accelerate?, I Am Accelerating​
Simulations and links: Physics Classroom Link 1,  Physics Classroom Link 2
Extension Opportunity: Create a screencast (Using screencastify) that uses resources from the internet and your voice to explain the impact that unbalanced net force has on acceleration.  Try to use multiple reliable resources to help you explain the concept.
See Videos Below: 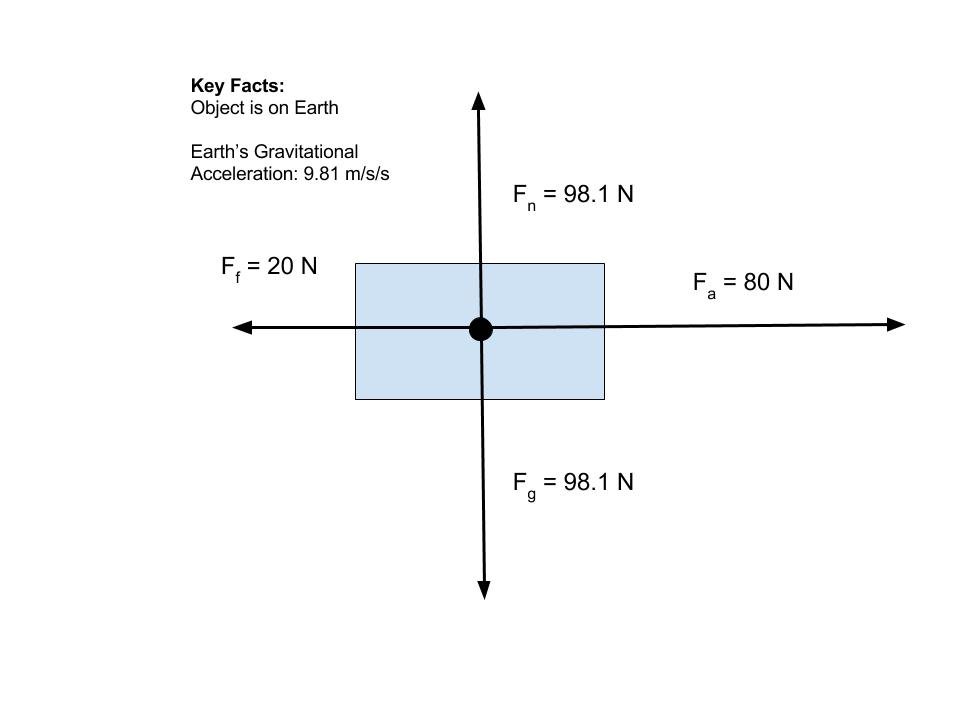 Explain that the rate at which an object changes its speed or direction (acceleration) is proportional to the vector sum of the applied forces (net force, Fnet) and inversely proportional to the mass.
a: Explain that for an object that is moving, this means the object will remain moving without changing its speed or direction.
b: State that while both horizontal and vertical forces can be acting on an object simultaneously, one of the dimensions must have a net force of zero when looking at one dimension.
c: Explain the relationship between acceleration, net force and mass.
Summary of Concept: This objective states that the sum of the forces being applied to the object will be mathematically proportional to the acceleration of the object.   This means that the more force that is applied to an object the more acceleration the object will experience.   This objective also points out that increasing mass will have an opposite effect on the acceleration.  Meaning, the more mass the object has the less the object will accelerate.  Essentially, this is a fancy way of discussing Newton's second law (Fnet = ma) .
Activities From Class: It's not magic it's Inertia, Ball and a Straw Lab, What Makes Something Accelerate?, I Am Accelerating​
Simulations: Grocery Cart Simulation, Newtons Second Law Simulation
Extension Opportunity: Develop a execute a creative lab where you investigate the relationship between Force, Mass, and Acceleration using real world items (We suggest using a rolling object so you can eliminate friction from your experiment)
See Videos Below:

State that a force is an interaction between 2 objects and that both objects in the interaction experience an equal amount of force, but in opposite directions.
a: Identify interactive force pairs by using the format “A acts on B so B acts on A”.
b: Explain that interacting force pairs are not the same as balanced forces.
c: Explain why interactive force pairs can never cancel.
Summary of Concept: This objective is primarily focused on Newton's third law of motion.  Newtons third law states: For every action, there is an equal and opposite reaction. The statement means that in every interaction, there is a pair of forces acting on the two interacting objects. The size of the forces on the first object equals the size of the force on the second object.
Activities From Class: ​ 3 is the Magic Number, Newton's 3rd Law Online Investigation, Force Pairs Practice
Simulations: Newton's Third Law Explanation
Extension Opportunity: Create a funny comic that is based around interactions between objects.  Within the funny comic, label the force vectors involved in the scenario.  Take a picture of your comic and post it to our extensions page!
See Videos Below:

Construct free body diagrams using information from motion vs. time graphs (or vice versa)
​a: Calculate force, mass, or acceleration using values drawn from tables, graphs, and free body diagrams.
Summary of Concept: Free body diagrams are useful tools for representing the many forces that could be acting on a single object at one time.  The goal of using a free body diagram is to quickly visualize the forces that act on the object being represented.  By visualizing these many forces, it becomes easy to identify balanced and unbalanced forces. Newtons Second law states that Force = Mass x Acceleration.  We can use this law to calculate Net Force, Mass, or acceleration. You should be able to find values that are presented in data tables and substitute them into the above formula.  ​
Activities From Class: Free Body Diagram Investigation, Kahn Academy Edpuzzle, Acceleration and Free Body Diagrams, Free Body Diagrams, Calculating Force Practice, Calculation Quizizz​
Simulations: Physics Classroom Interactive, Wisconsin Walkthrough, ​Force Calculator
Extension Opportunity: Create a real world scenario that involves forces acting on a real world object.  Video yourself talking about the forces acting on the object and then create a free body diagram on a whiteboard (or the paper) in the video. Create Free Body Diagrams with values.  Demonstrate how F=ma could be used to find the unknown value when given two of the three variables. ​
See Videos Below:
Powered by